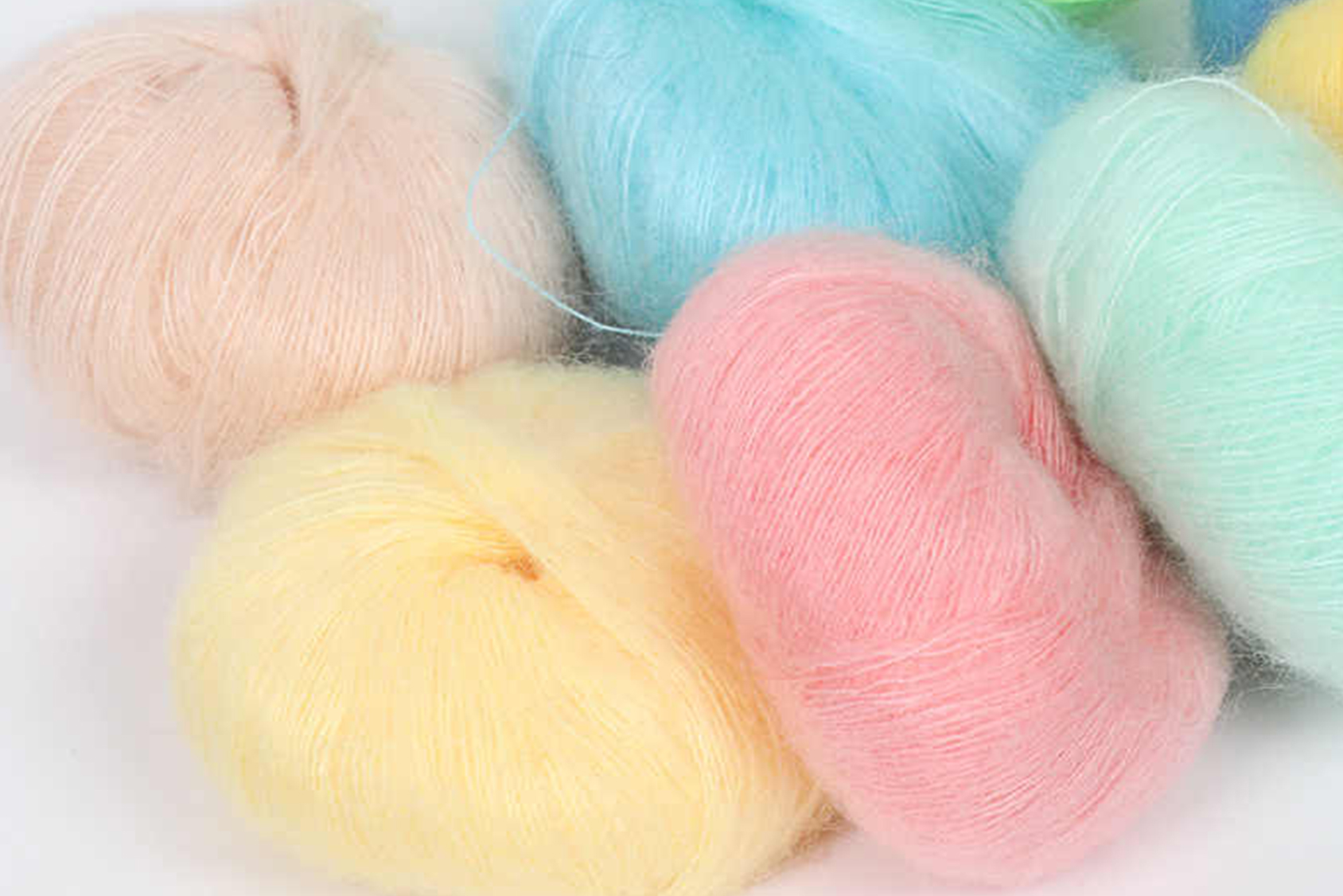 Angora wool is a type of wool derived from the coats of Angora rabbits. While this luxurious fiber has come under fire in recent years due to the mistreatment of Angora rabbits, it is entirely possible to produce Angora wool in an ethical, sustainable way that does not involve cruelty to animals.

At 12-16 microns, Angora wool fibers are among the finest types of wool fibers in the world, and as a result, Angora wool is remarkably silky and soft. This type of wool is impressively fluffy, and since the cores of Angora rabbit hairs are hollow, Angora wool has better heat retention qualities than most types of wool. Additionally, Angora wool does not have the allergenic properties inherent to other types of wool, making this fiber an essential alternative for people with animal hair allergies.

At this time, Angora rabbits were not primarily used for wool production. Instead, they served as pets, often for children, who were enraptured by their incredibly voluminous and fluffy coats. The first records of large-scale Angora wool production date back to the early 20th century in the United States. American entrepreneurs, viewing Angora wool as more than just decorative, quickly established businesses producing Angora wool scarves, sweaters, and other items. 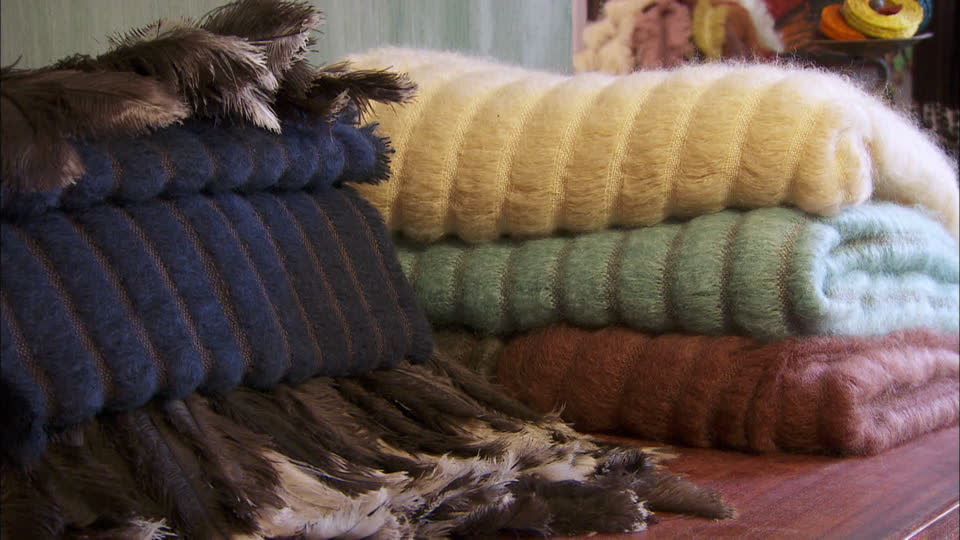 There are quite a few varieties of Angora rabbits, and many of these subspecies originated before Angoras were exported to the United States. Perhaps most iconic is the English Angora, which grows thick, fluffy hair on every conceivable surface and looks like a twitching, fluffy ball prior to shearing. French Angoras have it slightly easier since their faces do not grow thick fur, but they also produce significantly less wool.

Giant Angoras are, unsurprisingly, quite large, and they produce prodigious amounts of wool at the cost of being as large as house cats. While Satin Angoras produce the least wool of any Angora variety, their fur fibers are the thinnest and softest.

Angora fur tends to mat, which can lead to irritation or even infection since these rabbits have such soft skin. Traditionally, Angora rabbits were generally well cared for, but accompanying the Chinese textile boom that has occurred over the last few decades, Angora rabbit maltreatment has become common, leading to backlash from animal rights organizations. It remains possible to find Angora wool that was produced humanely, but the actions of unethical Chinese manufacturers have perhaps irrevocably tarnished the name of this undeniably luxurious fabric.

How is Angora wool fabric made?

At its best, the production of Angora wool consists of a respectful, sustainable relationship between human and rabbit. The Angora wool production process involves a few distinct steps:

Most breeds of Angora rabbits produce full coats of fur within 3-4 months. During this time, Angora rabbits are kept comfortable and routinely groomed to prevent the formation of mats. The state at which an Angora’s coat is considered to be harvestable depends on the type of rabbit.

Some types of Angora rabbits naturally start shedding their fur after around 4-5 months. Expert Angora breeders watch for telltale signs that a new coat of fur is about to come in, and they harvest the old fur before it falls off. While a somewhat unfortunate choice of words, the process of removing Angora fur that is about to be shed is called “plucking.”

In some cases, this process can be just what it sounds like: inhumane and barbaric. Respectful and ethical Angora breeders, however, gently pull the loose hair away from the rabbit without inflicting any pain.

Once an Angora rabbit’s coat has been removed, Angora producers sort through the hair fibers to remove mats and other coarse materials such as guard hairs. In some cases, Angora fur is also separated into grades based on softness. Angora fur is generally washed before spinning.

Washed Angora fur is then spun into yarn. Angora fur is naturally white, cream-colored, or light-brown, but it’s also possible to dye this luxurious wool fiber. 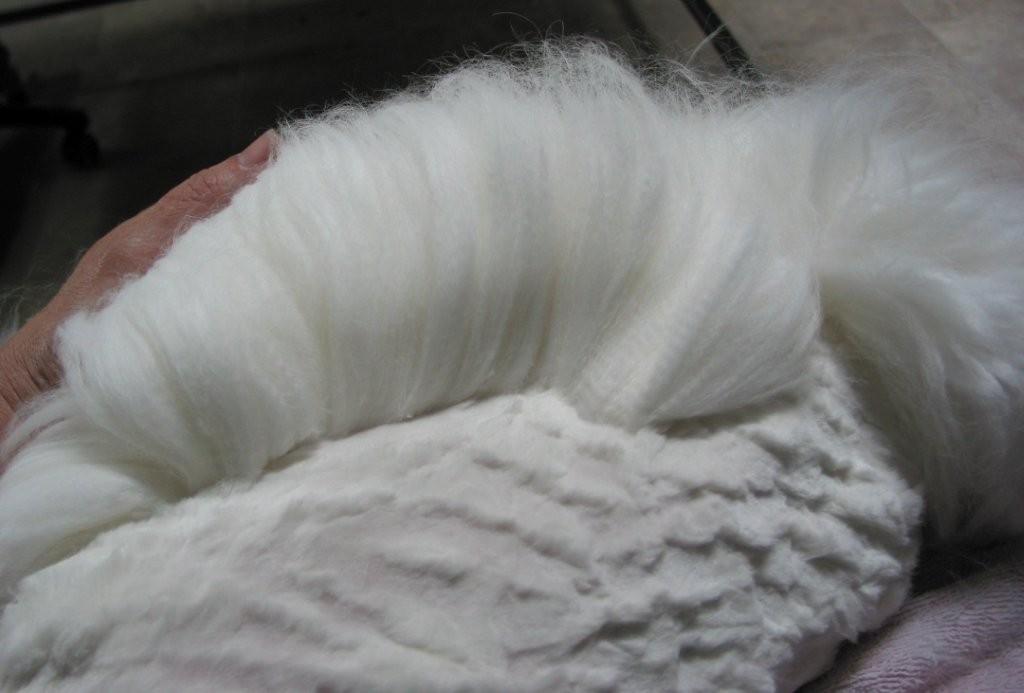 How is Angora wool fabric used?

Where is Angora wool fabric produced?

Today, the majority of Angora wool remains produced in China. Despite the best efforts of the international animal rights community, factory farms in China continue to produce thousands of tons of Angora wool per year, and in almost every case, Chinese textile manufacturers use cruel and inhumane practices to produce this luxury fabric. Apparel producers concerned over the practices employed by Chinese Angora producers can source their Angora wool from the United States or other Western countries that do not commonly engage in animal cruelty.

How much does Angora wool fabric cost?

Angora wool is one of the most expensive natural textile fibers. A single ounce of Angora wool can cost as much as £15, and garments made with this fabric are correspondingly expensive.

Textile manufacturers seeking to avoid associations with animal cruelty may need to pay even more for their Angora wool. While Chinese Angora wool producers commonly offer their wares for lower prices, these reduced prices are usually reflective of inhumane and unethical production processes. As a general rule, Angora wool that costs more is also more likely to be produced ethically.

What different types of Angora wool fabric are there?

There are a few different types of Angora wool, and there are also similar types of wool that are commonly confused with Angora. Here are a few examples:

While each breed of Angora rabbit produces fur with unique attributes, these distinctions generally become less noticeable once the fur has been spun into wool and woven into fabric. Fur from English Angora rabbits, for instance, is practically indistinguishable from fur from French Angora rabbits despite the fact that these animals look considerably different. Even wool from Giant, German, or Korean Angora rabbits looks and feels essentially the same as wool produced by more popular Angora breeds.

Mohair wool is not derived from rabbits. Somewhat confusingly, however, this type of wool is derived from another type of animal with “Angora” in its name: Angora goats. Also hailing from the Turkish city of Ankara, Angora goats are covered with long, shaggy hair, and they are believed to have originally evolved in Tibet. Shiny and lustrous while being significantly coarser than Angora wool, mohair wool is another type of fabric that has ended up in the crosshairs of the animal rights advocacy movement due to the commonly inhumane treatment of Angora goats.

Named for the Indian region of Kashmir, cashmere wool is derived from a unique species of goat native to the area. Cashmere wool fibers can be as thin as 18 microns, but they are still considerably thicker than Angora wool fibers. Regardless, cashmere is considered to be one of the most luxurious types of wool due to its softness, and the cost of cashmere wool is further increased by the fact that cashmere goats only produce a small amount of hair per year.

How does Angora wool fabric impact the environment?

Since production of Angora wool only constitutes a tiny fraction of overall textile production worldwide, the environmental impact of this fabric is essentially negligible. Coupled with the fact that wool is an inherently biodegradable fabric, Angora wool only harms the environment inasmuch as animal waste might be improperly disposed of or incorrect housing of Angora rabbits could lead to soil erosion.

The main issue posed by the Angora wool industry is ethical, not environmental. While properly taking care of Angora rabbits is a simple task, unethical Chinese wool manufacturers use barbaric methods to produce the greatest amount of Angora wool at the lowest possible cost. As a result, they commonly keep Angora rabbits in small, dirty cages, do not perform proper grooming, and subject their rabbits to malnutrition.

Additionally, Chinese Angora producers commonly shear their rabbits close to the skin, causing infections, and they may suspend their rabbits by their paws during the shearing process or forcibly immobilize them, causing extreme pain. Animal rights activists are right to decry the Chinese Angora industry, but breeders in other parts of the world most commonly treat their rabbits with care and respect.

The independent organization Textile Exchange provides Responsible Wool Standard (RWS) certification to Angora wool producers who meet a series of strict guidelines. To be eligible for RWS certification, Angora wool must be produced ethically, sustainably, and in ways that do not negatively impact any segment of the supply chain.

Angora wool that was produced ethically and organically may also be eligible for OEKO-TEX or Global Organic Textile Standard (GOTS) certification. The USDA or European Commission may also be willing to certify organic Angora wool. Certifications from these organizations, however, usually carry less weight since they may or may not take animal welfare into account during the certification process, making RWS the most respected Angora wool certification available.