NeoShell is a waterproof fabric produced by Polartec. It is designed to be a direct competitor of GORE-TEX, OutDry, and other waterproof membranes. Unlike most of its competitors, however, NeoShell is reasonably elastic and focuses more on breathability than waterproofing. At the same time, NeoShell is waterproof enough to keep you completely dry in wet conditions.

What is NeoShell fabric?

GORE-TEX is famous for having a 28,000mm hydrostatic head, which means that this fabric will remain waterproof even when exposed to significant pressure. In most applications, however, a water column rating that high is unnecessary, and the more waterproof a membrane is, the less breathability it offers.

The water column rating of NeoShell is only 10,000mm, but the developers of this waterproof membrane wanted it to be that way. In exchange for being somewhat less waterproof than GORE-TEX or other heavy-duty membranes, NeoShell is one of the most breathable waterproofing technologies on the market. Experts who have used this fabric report that you can blow through NeoShell, proving that it is highly breathable.

NeoShell consists of a membrane of millions of nanofibers that provide an effective barrier against water and wind while allowing air and sweat vapor to move away from your body. This membrane has a breathability rating of 30,000g/m2/24h mark, which considerably outperforms the industry standard of 20,000.

Perhaps most impressively, NeoShell is remarkably elastic, making it significantly different from GORE-TEX and other leading waterproof membranes. As a result, it’s possible to incorporate NeoShell into stretchy, tight-fitting garments. 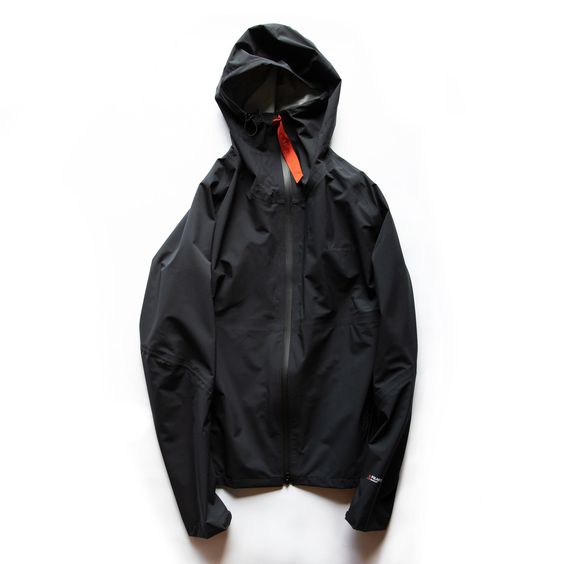 The first indication that NeoShell was on the horizon came in 2009 when Polartec launched its Power Shield Pro line. While not entirely waterproof, Power Shield Pro is more water-resistant than any Polartec textile produced to date, indicating that this American brand was considering entry into the waterproof membrane market.

In 2011, Polartec officially launched NeoShell, heavily emphasizing this new fabric’s breathability compared to GORE-TEX and other popular waterproofing membranes. Many of Polartec’s existing client brands immediately started using this membrane in their jackets and rain shells, and NeoShell entered the consumer market in full force in the fall of 2011.

Since then, Polartec has routinely made improvements to NeoShell, but unlike some of its other fabrics, Polartec has not yet come out with additional forms of this membrane. While today’s NeoShell is considerably more breathable and compatible with diverse fabrics than the NeoShell that was released in 2011, it offers the same level of waterproofing as the original membrane, and it has essentially the same properties.

One of the biggest changes to the NeoShell line that has occurred since its inception is the recent inclusion of this membrane in footwear. While Polartec expressed interest in using NeoShell in footwear when this membrane was first announced, it wouldn’t be until 2015 that this revolutionary waterproofing material appeared in the footwear market.

At present, NeoShell is featured exclusively in footwear produced by Altra, which offers active shoes for men, women, and children. Altra primarily includes NeoShell in its trail running shoes and light trail boots due to this membrane’s impressive breathability.

How is NeoShell fabric made?

NeoShell is produced using a proprietary process that involves electrospinning. It is then sandwiched between two layers of conventional outdoor apparel material and incorporated into a variety of product types. Here are the details on this proprietary production process:

NeoShell is made using a relatively new process called electrospinning. This process involves dissolving polyurethane in a solvent and spraying the resulting substance on a sheet until a film develops. This film is removed from the sheet once it has attained adequate thickness. Polartec pinpoints the density of the film to produce the desired degree of waterproofing and breathability.

2. Combination with other materials

The finished NeoShell membrane is then combined with outer and inner layers of conventional fabric, usually nylon. The inner layer, which makes contact with the skin, is commonly composed of a fine-gauge circular knit textile that resists snagging while maximizing comfort.

The completed NeoShell fabric is then shipped to one of Polartec’s contracted brands for incorporation into outdoor apparel.

How is NeoShell fabric used? 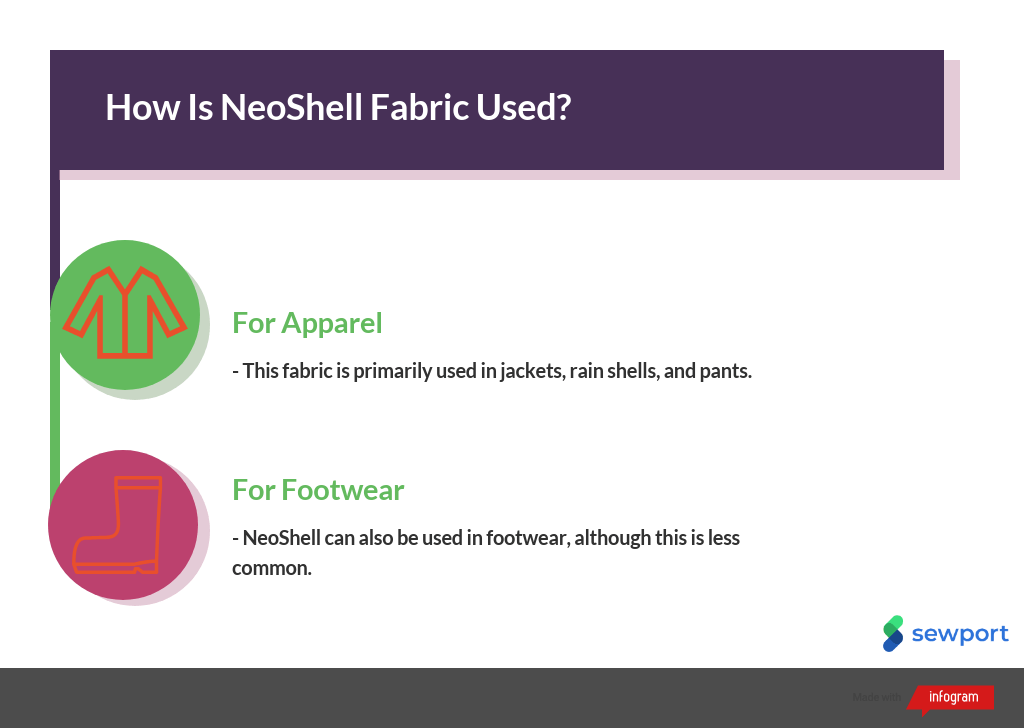 NeoShell fabric is primarily used in jackets and rain shells. Polartec markets NeoShell as offering the same protection as a hard shell jacket while being as soft as a soft shell jacket. Therefore, NeoShell is suitable both for cold-weather activewear and lightweight rain shells.

The considerable elasticity of NeoShell makes this fabric ideal for garments in which unhindered range of motion is key, so NeoShell membranes are increasingly common in pants and jackets used for skiing and snowboarding. While still relatively limited, NeoShell is also included in a handful of footwear items.

Where is NeoShell fabric produced? 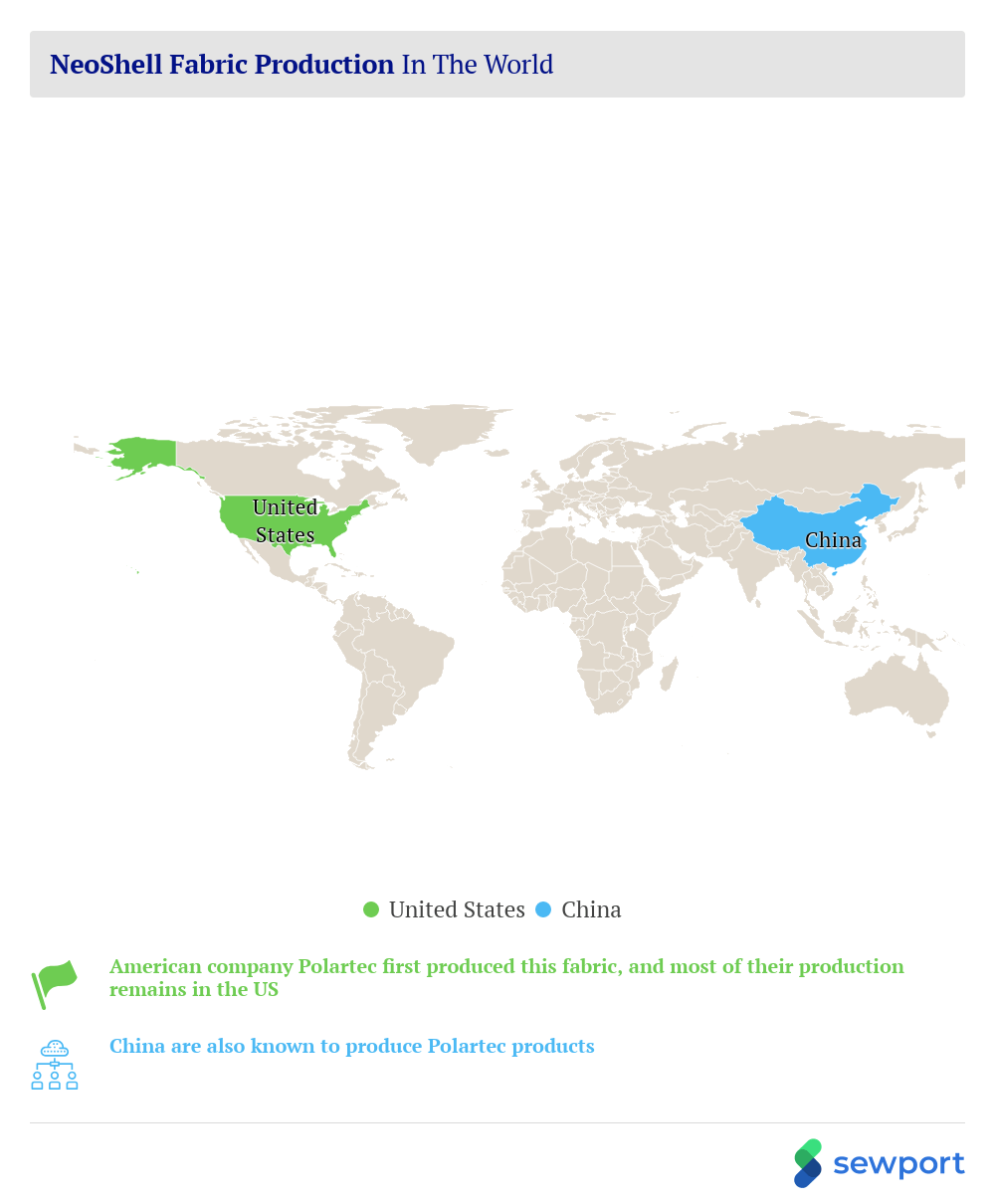 Polartec has manufacturing facilities all over the world, but this company primarily produces its outerwear products in the United States. In particular, Polartec has prominent factories in Massachusetts, New Hampshire, and Tennessee as well as in Shanghai, China.

How much does NeoShell fabric cost?

NeoShell is usually priced competitively with other waterproofing membranes. Due to its unique, high-tech attributes and relative novelty, however, NeoShell may cost more than conventional waterproofing materials like GORE-TEX.

What different types of NeoShell fabric are there? 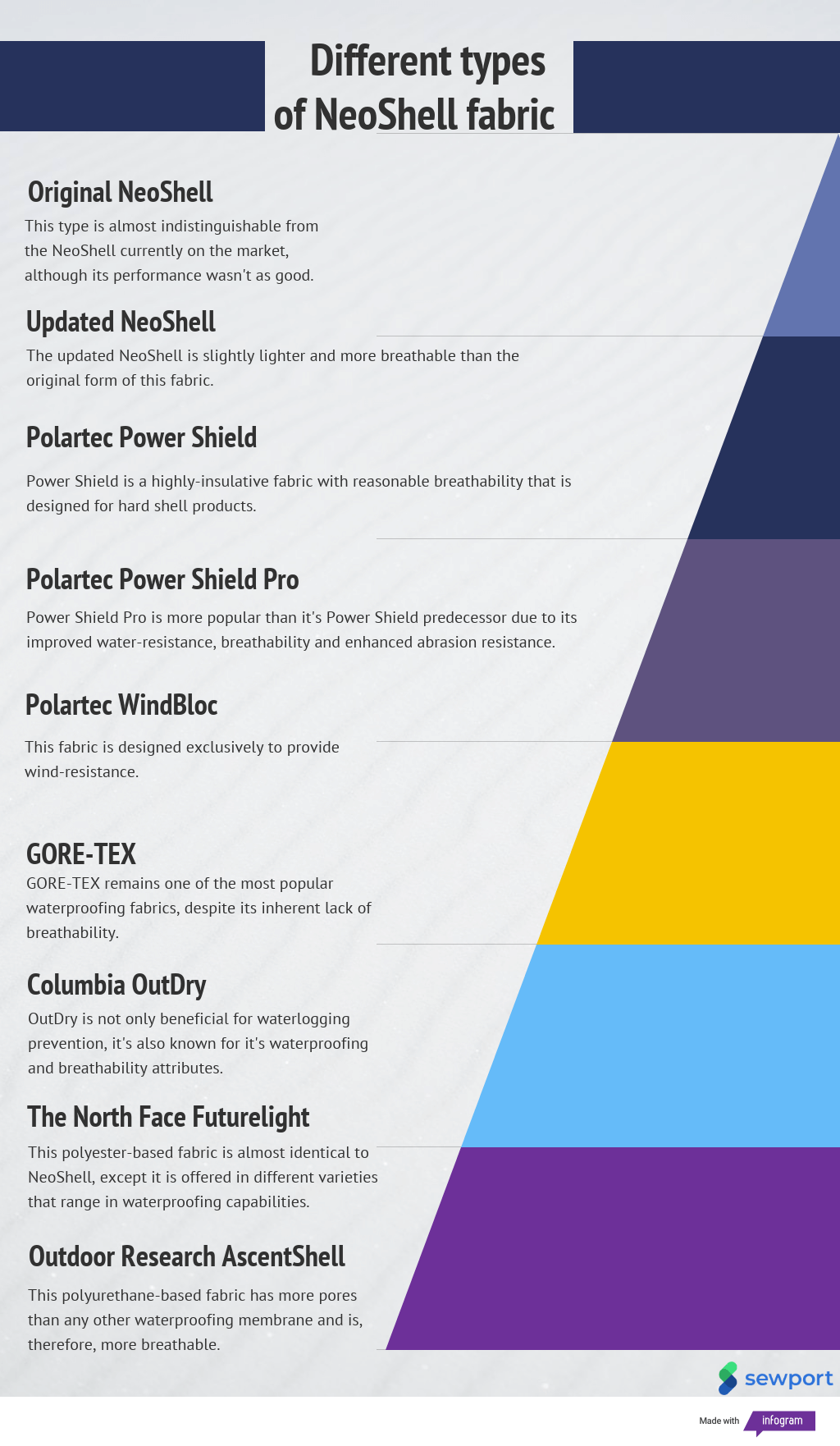 At present, there is only one type of NeoShell fabric, but this membrane has gone through two distinct iterations. Polartec also produces weather-resistant textiles that are similar to NeoShell, and this fabric has a variety of competitors that are worth noting.

In 2016, Polartec announced that it was working on a new type of NeoShell developed exclusively for its Japanese client Teton Bros. Originally only offered in Teton Bros apparel, this updated waterproof membrane is now included in almost all new apparel that features NeoShell. The updated NeoShell is slightly lighter and more breathable than the original form of this fabric.

Developed in the early 2000s, Power Shield was Polartec’s first attempt at a water-resistant fabric. Power Shield is designed for hard shell products, and it offers reasonable breathability. Power Shield is more insulative than NeoShell, but this attribute is not necessarily desirable for activewear. Additionally, Power Shield is not entirely waterproof. 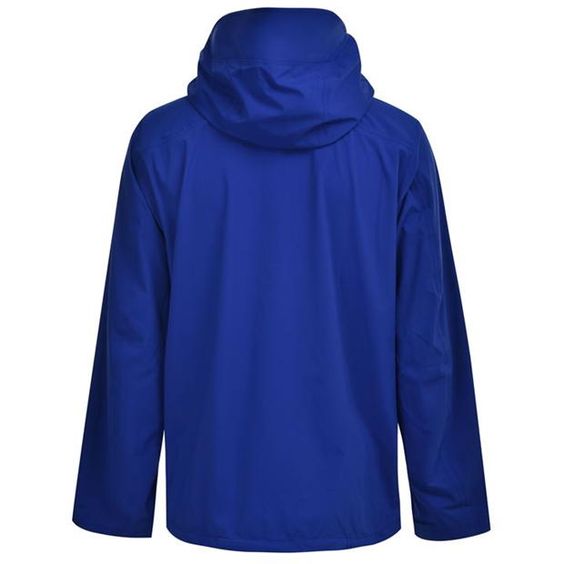 GORE-TEX pioneered the waterproof fabric industry. Developed by W.L. Gore and Associates in the early 1970s, GORE-TEX remains one of the most popular waterproofing fabrics to this day. However, GORE-TEX has some significant drawbacks, including its inherent lack of breathability and even further reduced breathability when not coated with durable water repellent (DWR). W.L. Gore and Associates has recently released new forms of GORE-TEX that attempt to counter these detractors.

First introduced in 2009, Colombia OutDry is a contemporary of NeoShell that also has impressive beneficial attributes. Applied as an outer coating to apparel, footwear, and accessories, OutDry prevents water from passing through the outer layers of fabric. The primary benefit of OutDry is waterlogging prevention, but this membrane also offers waterproofing comparable to GORE-TEX while remaining highly breathable and not requiring DWR treatment.

Futurelight by The North Face was just launched in 2019, and it is almost identical to NeoShell aside from being made from polyester instead of polyurethane. Unlike NeoShell, however, Futurelight is offered in a variety of different types that are either more breathable or more waterproof. In the development of Futurelight, The North Face developed a proprietary form of seam tape, which could help this new fabric perform better than NeoShell. 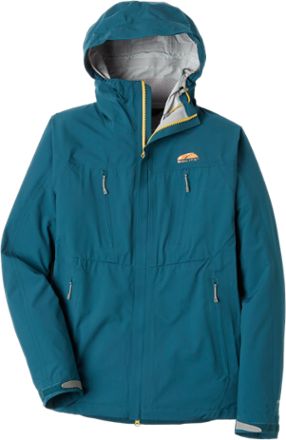 Also launched in 2019, AscentShell is similar to NeoShell and Futurelight in that it is produced using electrospinning. Like NeoShell, AscentShell consists of millions of tiny polyurethane fibers. Outdoor Research, the creator of AscentShell, claims that this fabric has more pores than any other waterproofing membrane and is, therefore, more breathable.

How does NeoShell fabric impact the environment?

Along with polyvinyl chloride (PVC), polyurethane (PU) is one of the most toxic types of plastic. This substance contains isocyanates, which are known respiratory toxins, and when exposed to heat, PU can produce dioxin, which is even more harmful. In addition, polyurethane production commonly introduces toxins into the hydrosphere and atmosphere.

Polyurethane is also one of the least biodegradable plastics. Once discarded, it either enters a landfill or the wider environment and contributes to plastic pollution. As a result, NeoShell, which consists of polyurethane fibers, contains a variety of toxins and has the potential to be a major pollutant when discarded. 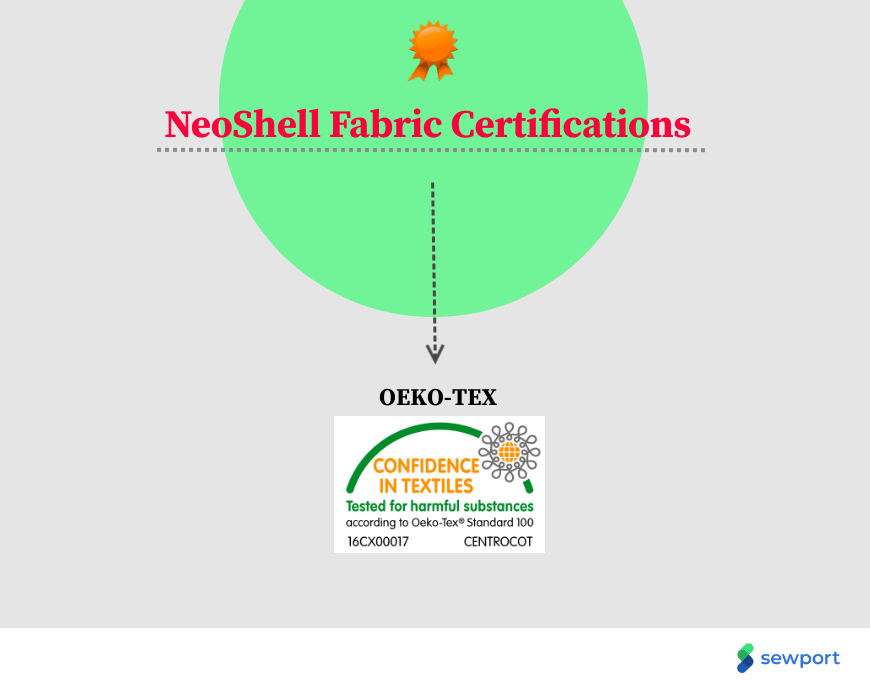 In 2005, Polartec received OEKO-TEX certification for all of its existing fabric products, but it is unclear if NeoShell has received this certification. Polartec provides certificates of authenticity to brands that use NeoShell fabric in their products.