What is Virgin Wool Fabric 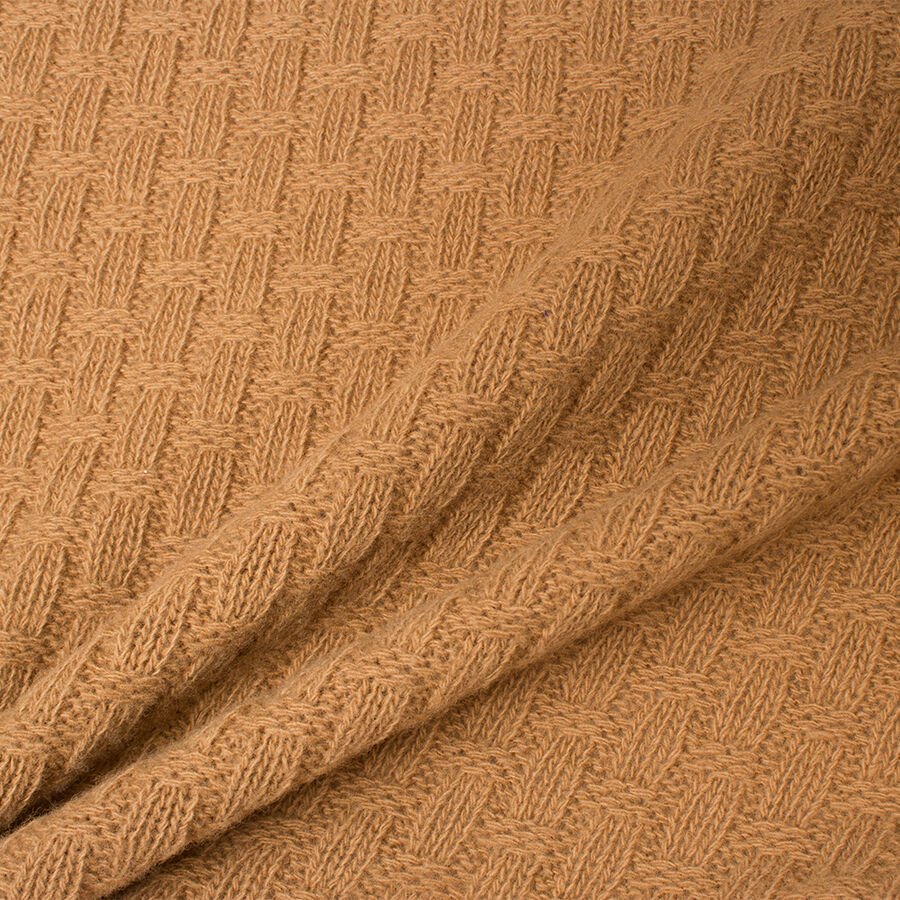 The term ``virgin wool`` can be used to describe two different types of textiles that are derived from the hair fibers of sheep. In some contexts, this term may refer to wool from a baby lamb's first shearing, but in other situations, it may refer to wool that has not been recycled.

During World War II, it became increasingly common to use recycled wool to make new garments. At the time, there was a significant shortage of textile fibers in the apparel industry, and every possible resource was expended to help with the war effort. Therefore, new wool was hard to come by, and many individuals and textile manufacturers resorted to using wool from existing garments or home textiles to make new products.

This recycled wool was not as high-quality as new wool, so wool that had never been used before took on the name “virgin wool,” which had already been in use to describe the softest type of wool on the market. Today, however, there is no global shortage of textile fibers, and there is plenty of wool to go around. 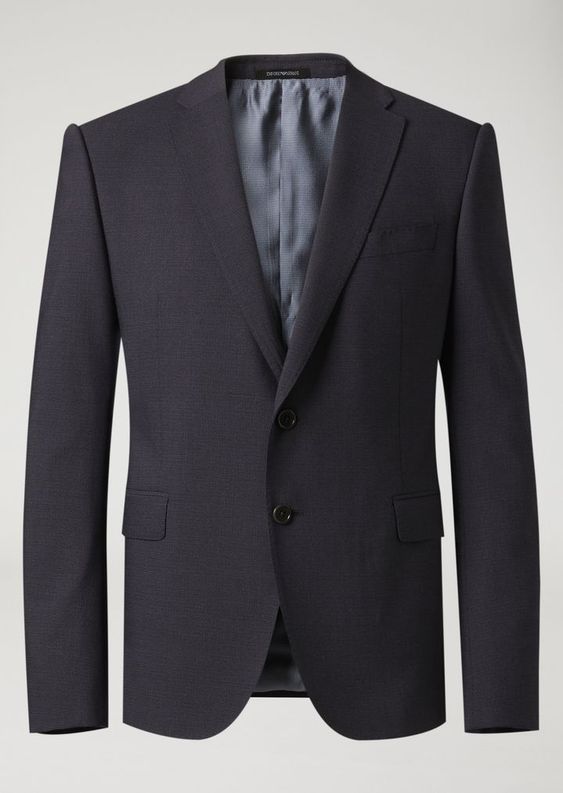 The hair fibers that sheep produce coarsen as they age, so the wool derived from baby lambs is the softest type of wool that sheep produce. Lambs are generally ready to be shorn when they are about one year old, and the wool from this first-year shearing is highly prized among textile enthusiasts. Some consumers even go so far as to declare that this type of wool is as soft as luxury textiles like cashmere.

Whether or not it is spun from the hair fibers taken from a baby lamb, any wool called “virgin wool” is guaranteed to be stronger and more durable than recycled wool. To create recycled wool, existing wool garments or homewares are shredded, which breaks up the fibers that were originally spun to make these wool products.

Therefore, the recycled wool product that is made from these fibers is not as strong as new wool, and it is more likely to wrinkle, stain, or retain odors. In addition, new wool fibers have better elasticity than recycled wool fibers, and garments made from virgin wool can last for decades.

How Is Virgin Wool Fabric Made? 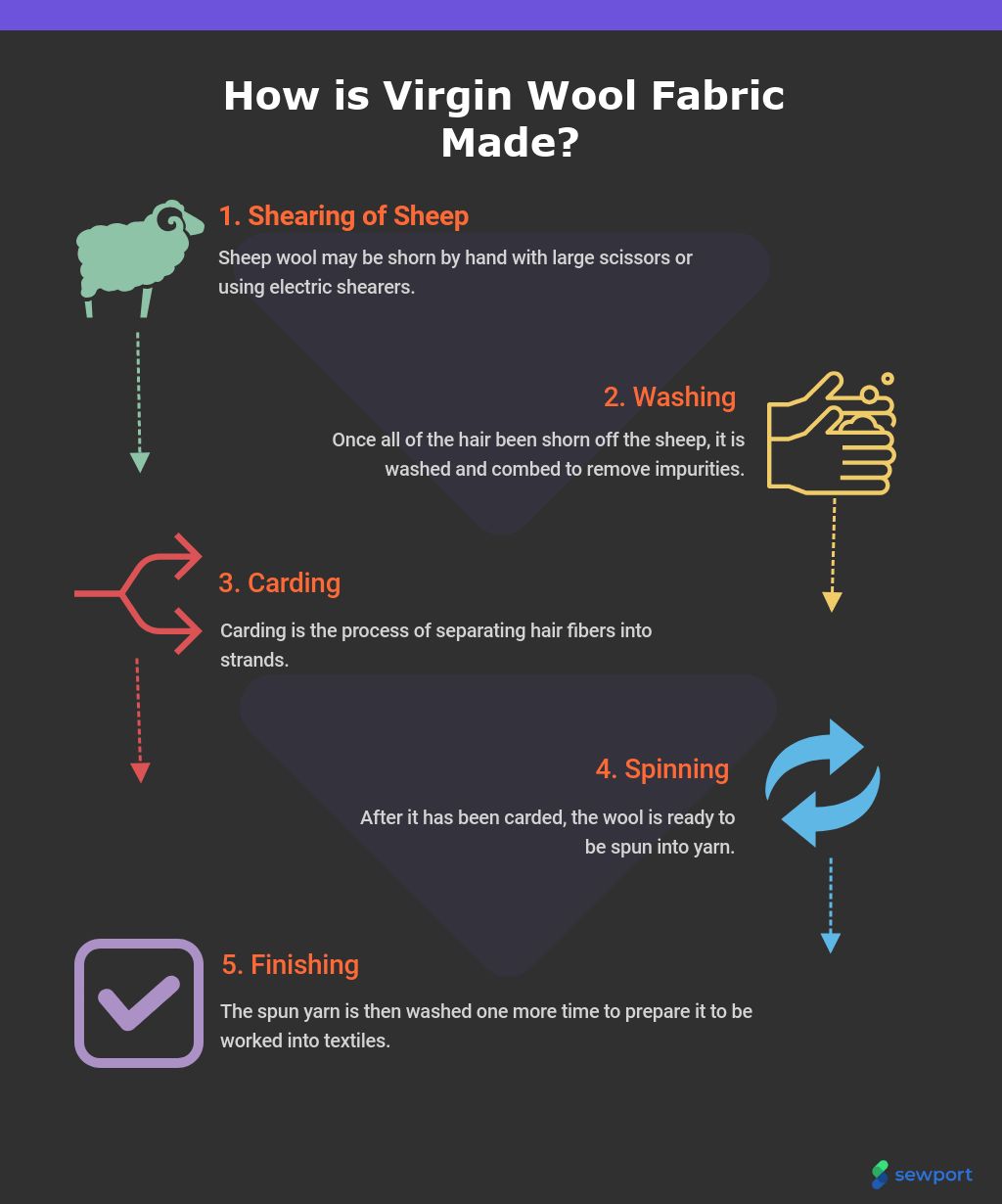 The process of making virgin wool begins with a procedure called shearing. Most types of sheep need to be shorn at least once per year, and sheep breeders can tell when their animals are ready to be shorn based on the richness and fluffiness of their coats.

In some cases, sheep wool may still be shorn by hand with large scissors. However, it is much more common these days to use electric shearers, which are much more efficient. Unlike some other wool-bearing animals, sheep don’t usually resist the shearing process. As long as a sheep is positioned properly and it isn’t frightened by any sudden movements, it can be shorn without any potential of harming or traumatizing the animal. 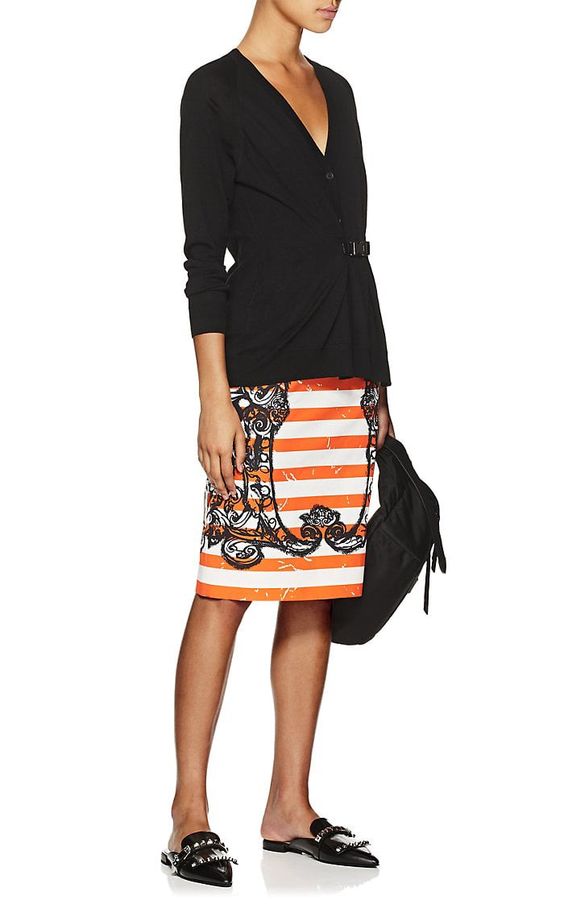 Wool is relatively dirty right after it has been shorn, so it is generally washed or combed before it is carded into straight strands of fiber. This carded fiber is then spun into yarn, and a variety of techniques may be used in this spinning process. In some cases, hand spinning machines may be used to make wool yarn, but it is increasingly common for this procedure to be accomplished with automated machines.

Once wool yarn is produced, it is washed again, and then it is loaded onto large spools. In some cases, this wool may be dyed in the same factory where it was spun, but this process may be done once it is transferred to a textile manufacturing plant. At this plant, a wool apparel or homeware manufacturer may also apply a number of additives to wool before weaving it into fabric.

For contrast, the process of producing recycled wool begins with the sorting and cleaning of existing wool textiles. These textiles are then shredded, and these shredded fibers are spun back into yarn. In some cases, the color of the original textile may be retained, or recycled wool yarn may be re-dyed. It is this shredding process that renders recycled wool less tensile and less desirable in the consumer market.

The process of making virgin wool from baby lambs is no different from the process used to make new wool from mature sheep. However, the resulting yarn is much softer than the yarn produced from fibers derived from mature sheep, and it can be spun into finer garments since it doesn’t lose durability at thinner yarn widths.

How Is Virgin Wool Fabric Used? 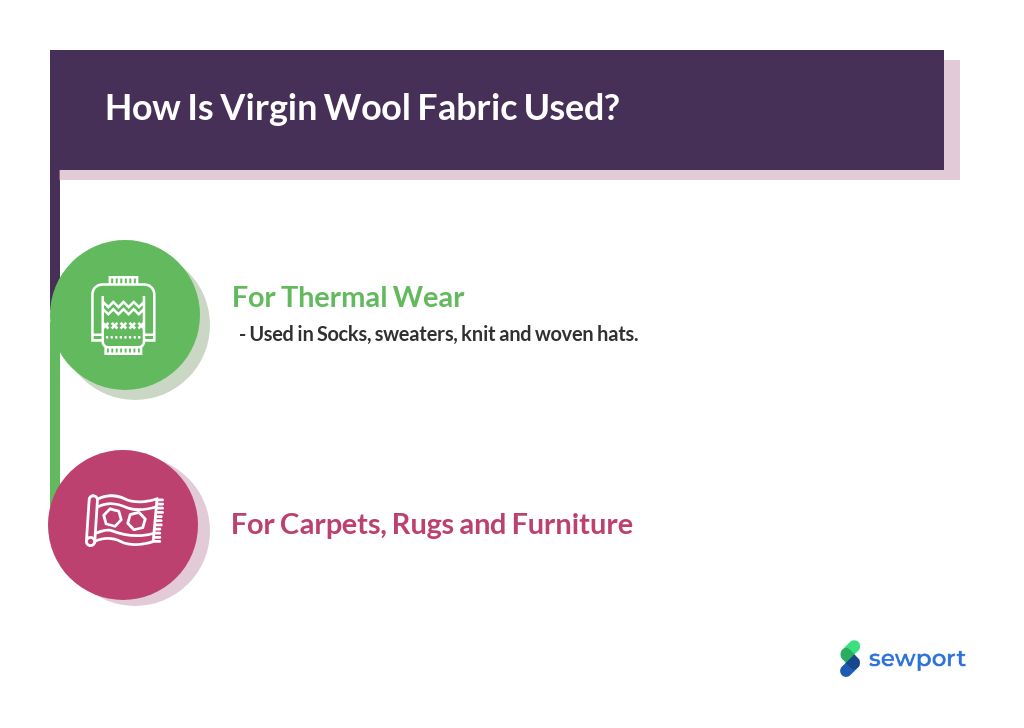 Wool has been used to make garments and other textiles for at least 8,000 years. Sheep were first domesticated about 10,000 years ago, but records of woolen textiles don’t appear until around 6000 BC. This fabric has been used in Europe since at least 1500 BC, and in many ways, wool is still used similarly to the way it was used thousands of years ago.

The textile derived from spinning the hair fibers produced by sheep has long been lauded for its durability, heat retention, and resistance to heat transfer. Therefore, this fabric has long been popular among people living in extreme climates; it doesn’t let the outside heat or cold in, and it keeps your body heat from getting out. Wool can absorb nearly one-third of its weight in water, it is highly resistant to flame, and it does not produce any toxic chemicals when it is burned.

Despite its resistance to heat transfer, wool is naturally breathable, and this fabric is relatively stretchy, which makes it ideally suited for a number of different types of textiles. Some ancient sheepherding peoples made almost all of their textiles from wool; it’s true that this fabric can be used to make everything from clothes to blankets to tents to diapers. In modern times, however, consumers have wide access to a variety of different textiles, and it’s widely understood that certain types of textiles are better than wool for certain applications. 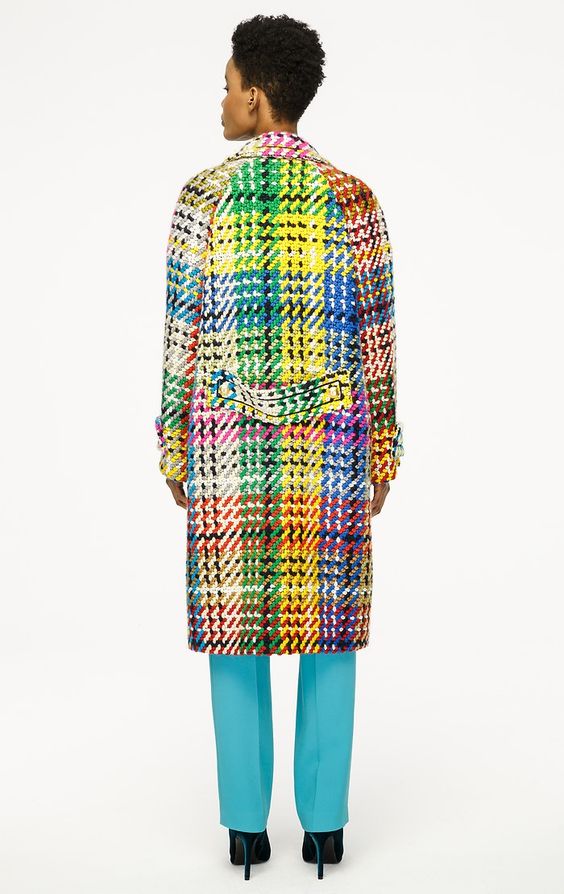 One application in which wool is still widely used is thermal wear. For instance, it’s common to see socks and sweaters that are made from this substance, and wool is also commonly used to make both knit and woven hats. Some consumers even prefer to use closely-knit forms of wool for underwear due to its impressive moisture-wicking and breathability profile.

In addition, wool is widely used in rugs and furniture. Unlike most types of carpets, wool burns cleanly, and it is also less of a fire hazard. Wool carpets and rugs are also easy to clean, and this fabric is commonly used to make upholstery for chairs and sofas.

Where Is Virgin Wool Fabric Produced? 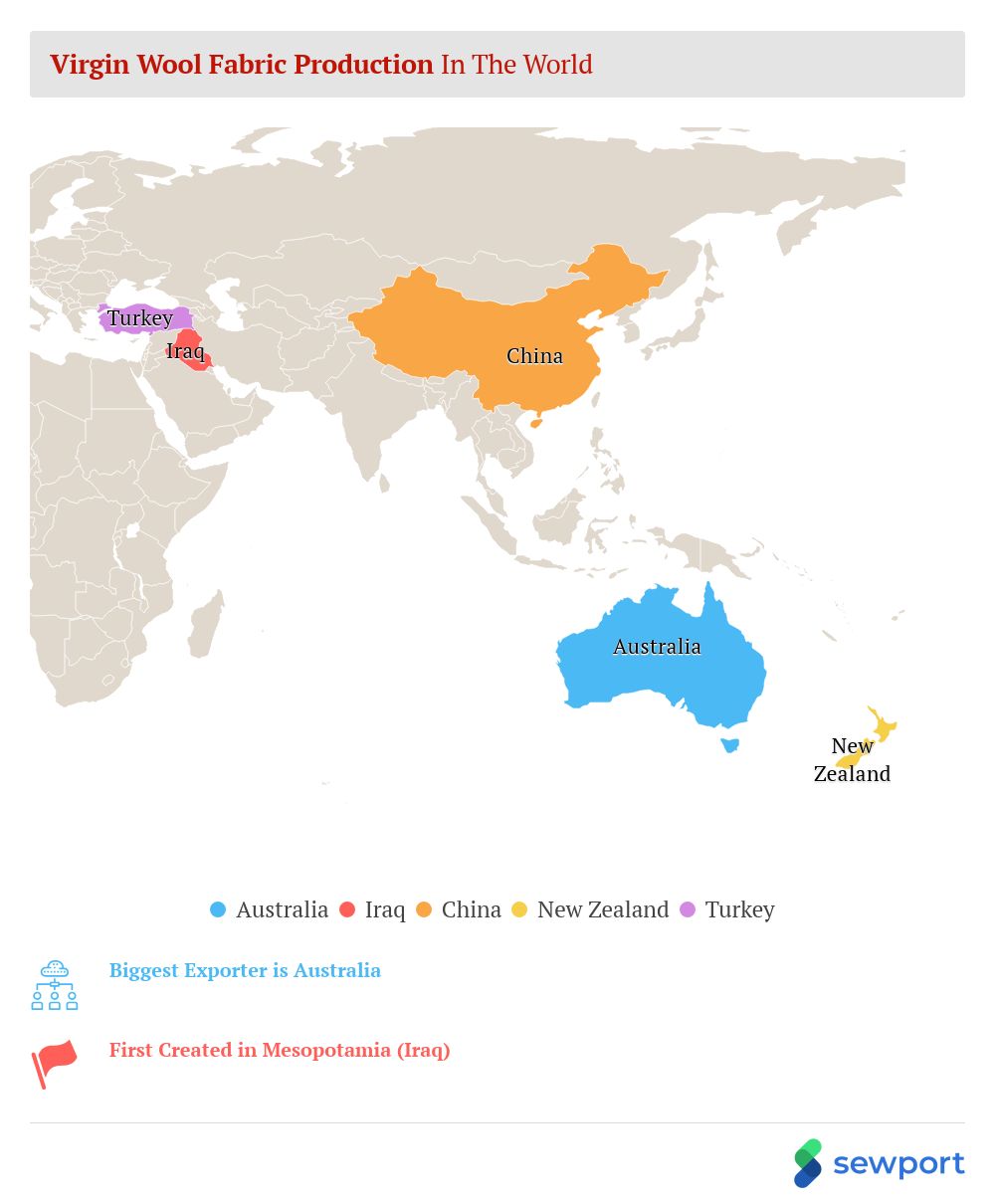 Australia is the largest producer of wool in the world. The majority of the wool produced in Australia is merino wool, and wool is one of this country’s biggest exports.

Large tracts of Australia’s rural land is set aside for sheep breeding, and hundreds of thousands of Australians are involved in the wool production industry in one way or another. This country produces nearly 500,000 metric tons of wool per year.

Next to Australia, China is the second-largest wool producer at around 250,000 metric tons produced per year. In addition, the United States produces about 150,000 metric tons of wool, and this country is followed by New Zealand, Argentina, and Turkey.

How Much Does Virgin Wool Fabric Cost?

Wool is generally an inexpensive fabric. At the consumer level, the price of this fabric is on par with various natural and synthetic textiles like polyester and cotton. 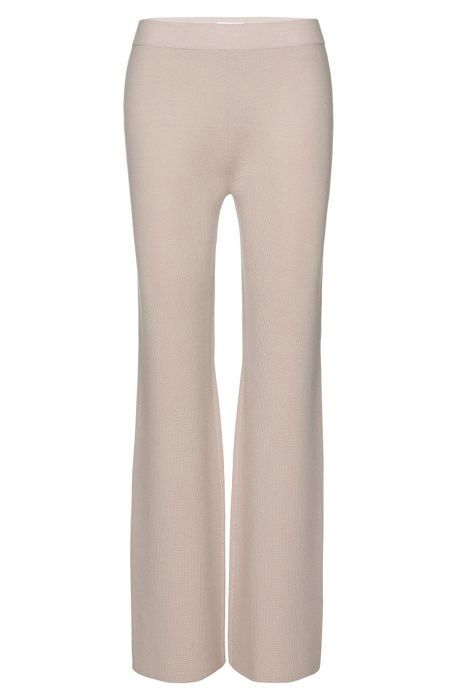 Virgin wool, however, may command a higher price than recycled wool. Historically, recycled wool was significantly cheaper than virgin wool, but the prices of these two types of textiles have normalized in recent decades.

When “virgin wool” is used to refer to wool taken from baby lambs, however, another picture emerges. Due to the incredible softness and durability of this type of wool, virgin wool from baby lambs commands a considerably higher price in the free market. This type of wool is also frequently used to make high-end consumer textiles, which means that consumers often end up paying considerably more for virgin wool products even if the price per ton of this type of wool is commensurate to the bulk price of other types of new wool.

What Different Types of Virgin Wool Fabric Are There? 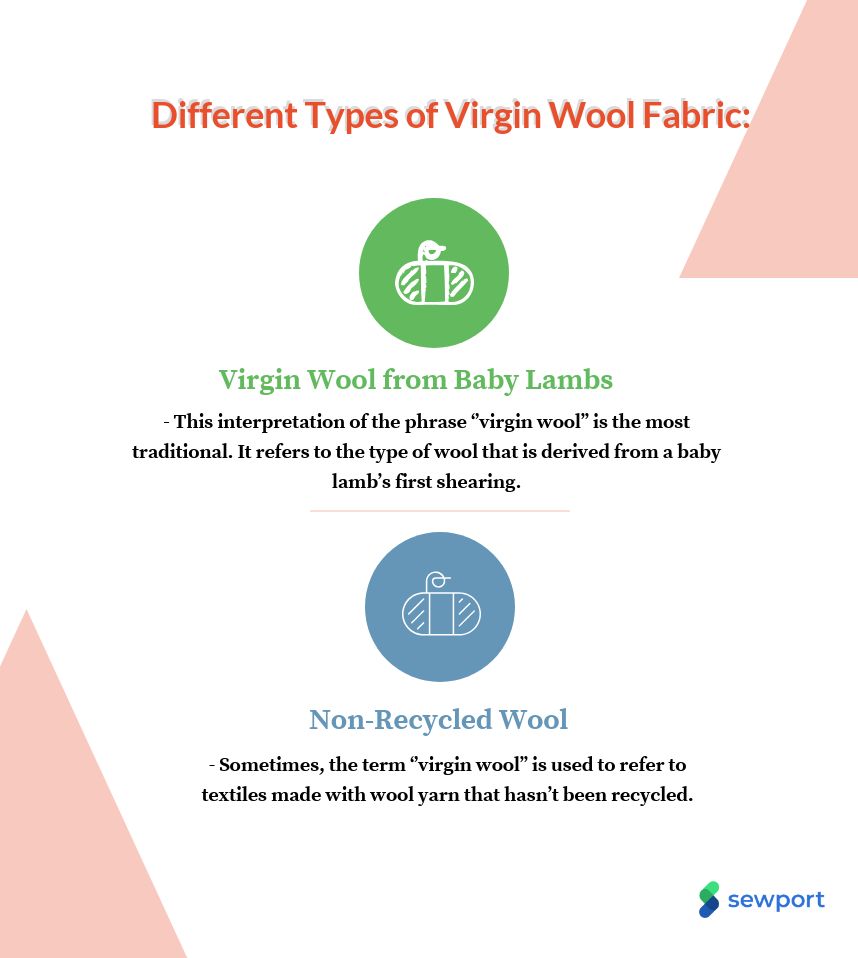 How Does Virgin Wool Fabric Impact the Environment?

The production of virgin wool is generally considered to have a minimal environmental impact. Since wool is derived from animal fibers, it is an inherently sustainable fabric, and wool is also highly biodegradable; it only remains in the environment for a few years before it is broken down.

However, when wool is mass produced, it may have a significantly negative environmental impact. For instance, a large amount of feed is required for sheep breeding, and this need for sheep foodstuffs can put a strain on the surrounding ecosystem. The raising of sheep can also degrade soil when this process is undertaken unsustainably, and it can also cause water pollution. 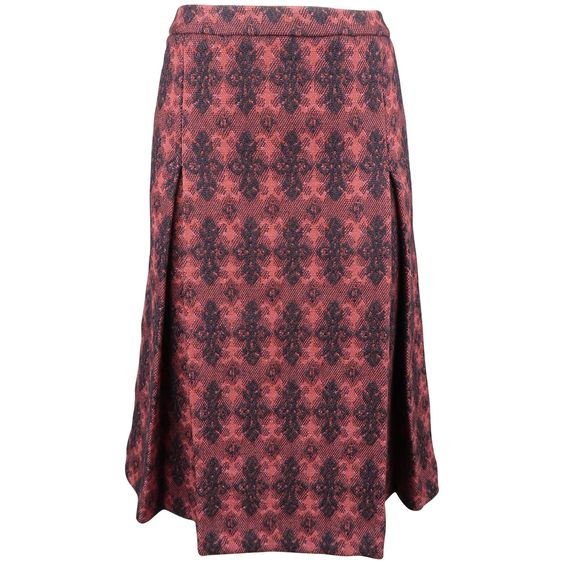 Lastly, the practice of raising sheep can also lead to the inadvertent deaths of other animals. Sheep breeders in Australia, for instance, routinely kill pest animals, such as kangaroos, to ensure that they do not interfere with their sheep herds.

After sheep wool is harvested, the process of turning this fiber into yarn is generally environmentally-friendly. If toxic dyes are used on wool yarn, however, negative environmental effects can occur.

Some consumers prefer recycled wool to virgin wool because they perceive that this substance is better for the environment than new wool. While this may be true, it’s also important to keep in mind that significant energy and labor is expended to sort and shred old wool textiles before they are remade into yarn. 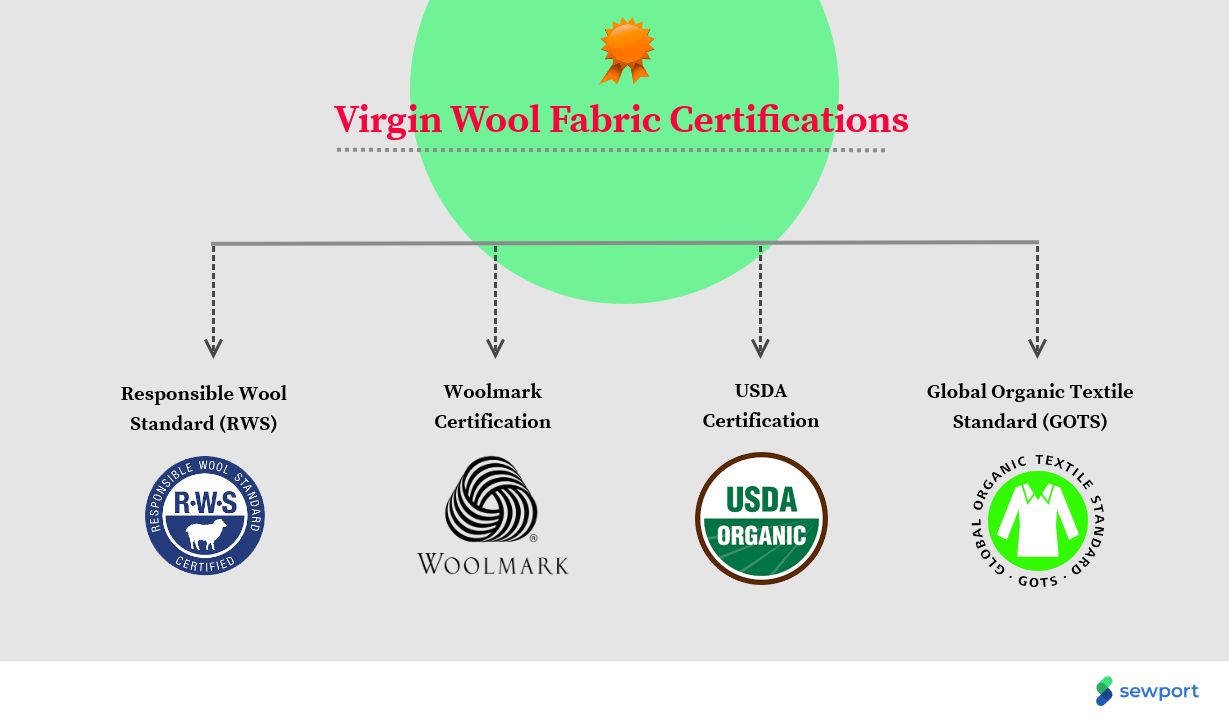 The Responsible Wool Standard (RWS) is an independent organization that offers certification to wool products. For a wool textile producer to receive RWS certification, it must be proven that they only use sustainable processes in the production of their wool. RWS certification is offered for products made with virgin wool from lambs, new wool from mature sheep, and recycled wool.

In addition, a prominent wool textile brand called Woolmark offers certification services to other wool producers. This organization uses similar criteria to those observed by RWS when determining whether or not a wool product is eligible for certification. Furthermore, USDA organic or Global Organic Textile Standard (GOTS) certification may be offered if it can be determined that wool was produced using organic practices.