The Safavid Dynasty and its patronage of the arts during the 16th – 18th centuries led to the advancement of the textile arts to a level that set a new standard.

Iranian Textile Treasures from Our Collection

The Safavid Dynasty and its patronage of the arts during the 16th – 18th centuries led to the advancement of the textile arts to a level that set a new standard. The textile industry consisted of urban centers that were supported by a local agricultural industry that produced silks and wools for the production of fine cloth and rugs. The cities of Qazvin, Esfahan, and Tabriz were set up as industrial centers and represented a significant revenue stream for the Safavid Sultans. The tradition of fine textile weaving continued through the 20th century, and the famed cities continued to create textiles that are still awe-inspiring to this day. At Nazmiyal, we are honored to have some of these treasured Iranian textiles as part of our collection. Here are a few of our favorites. 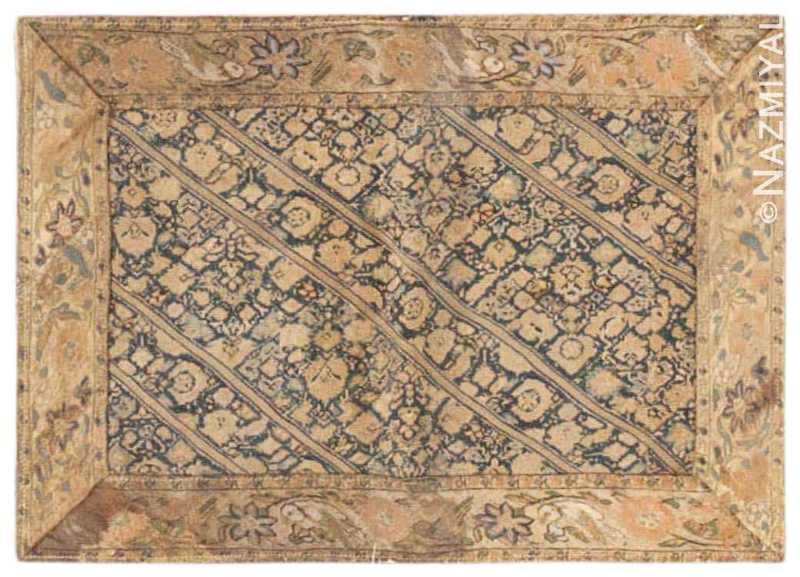 During the 17th century, the number of textiles and fine silks in one’s collection was an outward expression of wealth. Finding an existing piece from the Safavid Dynasty is a rare treat. Unfortunately, due to the fragile nature of organic materials and metals, such pieces are rare. This piece shows the versatility and complexity of which the looms were capable. This piece is inspired by traditional Persian rug designs from the same period. It is two pieces of fabric, one that is a narrow strip that serves as a border, and the other serves as a field design. The deeper color and elegant florals are a delight to the senses in his rare, historical piece. 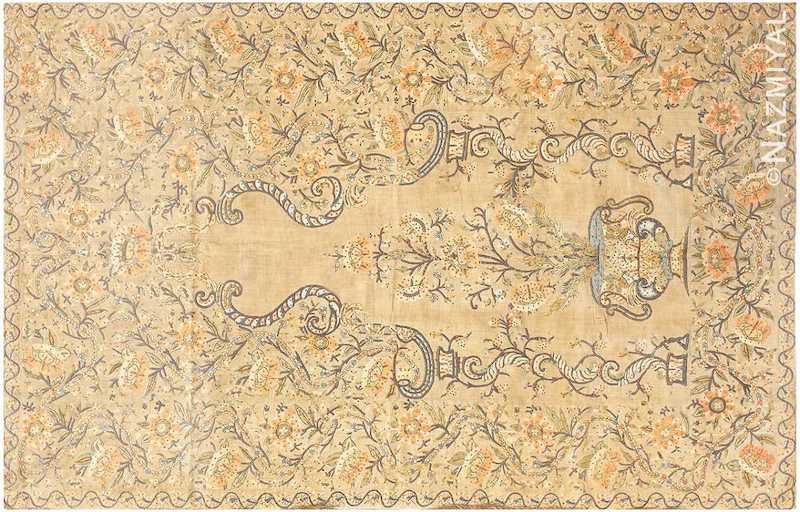 This magnificent piece of work from the 19th century is a piece of fine, intricately detailed piece of silk embroidery. Silk has a natural shimmer that no other fiber can imitate. It also takes color beautifully and allows for breathtaking artistry. This piece was intended as a rug, and it features a vase design, which is borrowed from Persian rugs of the time. This piece takes the level of detail to one that is more like a fine painting. The design is graceful and elegant. Many times, rugs of this type were intended to be hung on walls, used in religious ceremonies, or in areas of the court that did not receive high traffic. The colors enhance its delicate and refined feel that is found in many antique Iranian textiles from this time period. 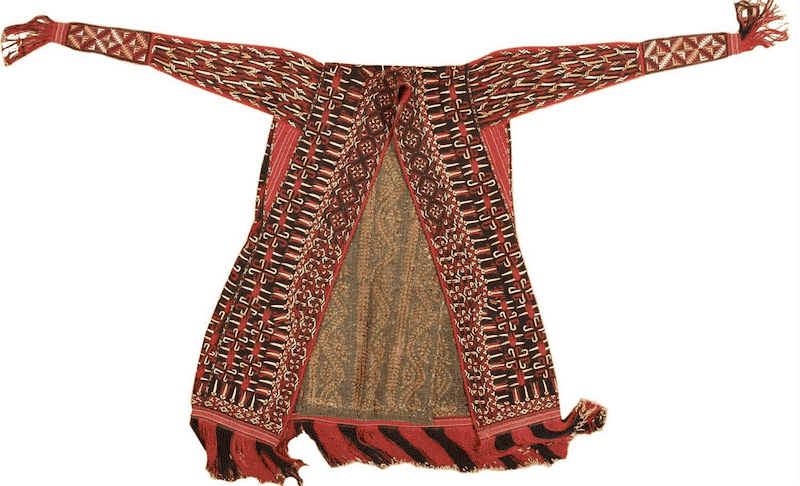 The Qashqai is a group of clans in the region around Esfahan. They are a diverse, tribal group whose population includes Turks, Kurds, Arabs, and Persians. They are traditionally a nomadic people. This overcoat was created around the turn of the 20th century. It represents an excellent example of tribal weaving with its gorgeous colors and tribal fringe. This piece is heavy, and it was designed to offer protection from the elements.

The long, narrow sleeves demonstrate a style found throughout traditional Safavid Dynasty clothing for both men and women. The sleeves were often pushed up to create a ruffled, puffed effect on the lower part of the arm. This piece appears to have been pieced from other garments. Often, when a piece of clothing or other cloth wore out, they would reuse what was still salvageable and use it to create a new item. Tribal pieces are found less frequently than those from urban centers. It is a gorgeous piece of antique tribal art. 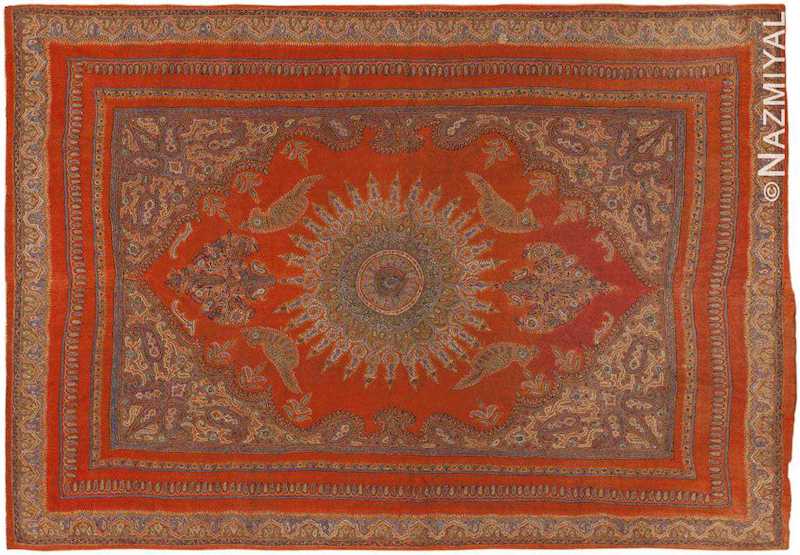 This regal, fine antique shawl from around Esfahan is from the late 19th century. It is inspired by a medallion rug with its tribal symbols, including birds for luck and the boteh, or eternal flame. It shows a fine level of detail and spectacular use of color. These shawls were worn around the shoulders, or they were used as a head covering for modesty. Traditionally, they were an important part of the women’s wardrobe, and this one is a beautiful example. The shawl’s complex pattern is an excellent example of the level skill of Iranian textile weavers. 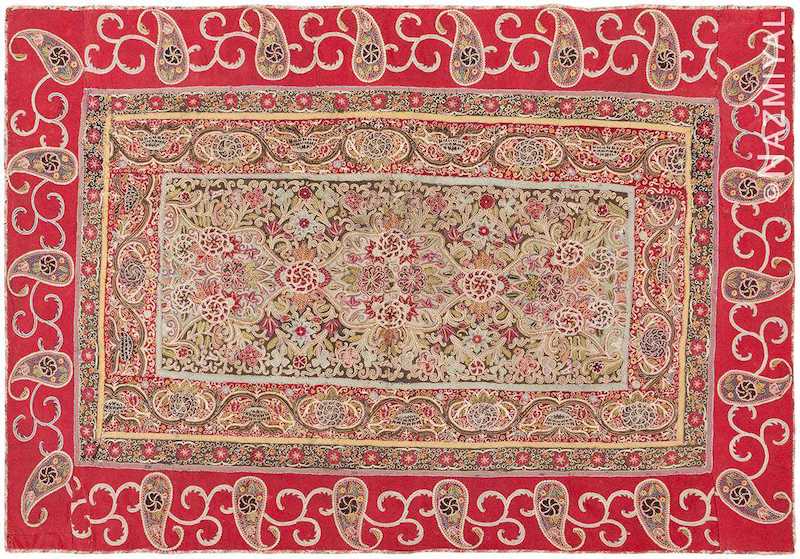 This gorgeous piece of Persian Rashti embroidery from the early part of the 20th century uses vibrant colors and demonstrates the range of design of the Persian weavers. The piece creates a contrast between the intricate design in the center of the piece and the more abstract boteh design on the outside. Rashti is an area located on the Caspian Sea and is known as the City of Rain. Around the time of the creation of this piece, it was a center of silk production and export. Many of the designs created in the region continued to reflect the traditional colors and designs of those produced in the city during the Safavid Dynasty. 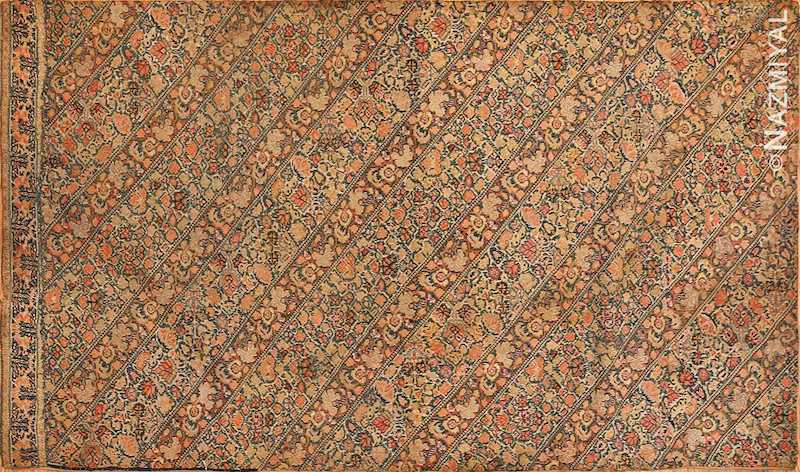 The earthy colors of this breathtaking Zanjan textile from the 17th century reflect a deep connection to the earth. Zanjan is a city and a region that is largely rural. Many of the pieces created in the region have an ethnic and distinctively tribal quality. However, they also produce some pieces that show a high level of skill and artistry, such as this one. Zanjan is located to the northwest of Tehran and is close to Turkey. The region is how a diverse, multicultural population. As such, the designs from this region show the influence of many cultures that would eventually develop into a unique regional style that is easily recognizable. 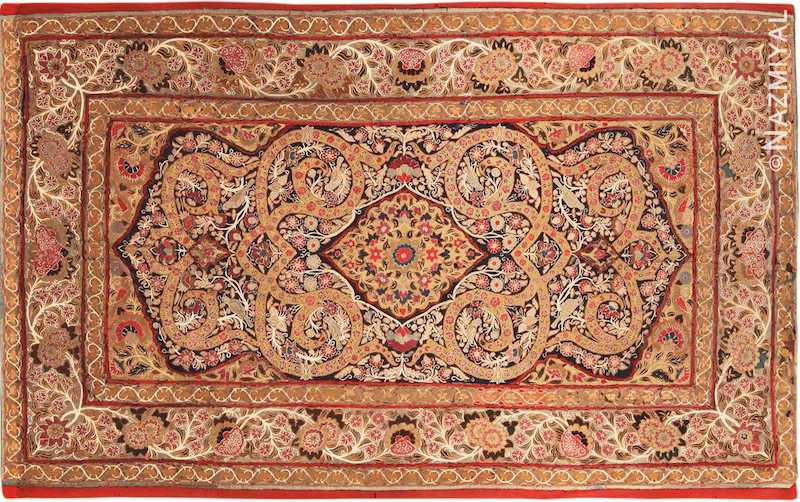 This striking piece of Rashti embroidery was created using a variety of techniques. It includes applique work and traditional embroidery stitches. It is an intricate piece of work that demonstrates and high level of skill. It contains many traditional symbols, such as birds and a garden of floral patterns. The design was inspired by a medallion carpet. Pieces such as these were designed to be used as rugs, wall hangings, or table covers. This piece shows the skill of Iranian textile artists and is a breathtaking piece of art.

As you can see, Iranian textiles represent some of the most beautiful pieces of artwork in the world. Their designs and techniques have been passed down through several centuries, many of which were from the Golden Age of the Arts of the Safavid Dynasty. The best part about this collection is that if you see anything that you like, you can feel free to contact us and make it a part of your own collection.